What is Inflammatory Bowel Disease?

Inflammatory Bowel Disease or IBD refers to chronic inflammation of the bowel.  In general, there are 2 types of Inflammatory bowel disease:  Crohn’s disease (CD) and Ulcerative Colitis (UC). IBD is not the same as IBS (Irritable Bowel Syndrome) which is a benign functional bowel condition nor is it infectious. Approximately 30% of IBD presents during childhood and adolescence.

What is Crohn’s Disease?

Crohn’s Disease (CD) is the more common type of Inflammatory Bowel Disease in children. It affects any part of the digestive system, from the mouth to the stomach and intestine all the way to the anus. Areas of inflammation are often patchy, with sections of normal gut in between. The most common areas of involvement are the small intestine and the large intestine. Both the lining and the deeper muscle layers of the intestine wall may be affected in Crohn’s disease.

Crohn’s disease is a form of autoimmune disease when the body’s own immune fighting system starts attacking healthy cells. The exact cause of Crohn’s disease is unknown. It is thought to be caused by a combination of both genetic and environmental factors which lead to activation of the immune system causing injury to the lining of the digestive tract. The inflammation further leads to ulcers and bleeding.

What are the signs and symptoms of Crohns Disease?

Not all patients with Crohn’s disease will have all the features listed above.  Some patients may just present with recurrent abdominal pain and tiredness. Others may have chronic diarrhea while some patients have loss of appetite.

How is Crohn’s Disease diagnosed?

If you are worried that your child may have Crohn’s disease, he or she should see a paediatric gastroenterologist early for further workup.

Following a thorough medical history and physical examination, your doctor will order blood tests, stool tests and/or imaging studies. An upper endoscopy and colonoscopy will be performed by the paediatric gastroenterologist to confirm the diagnosis and evaluate the severity of the disease.

If you are worried that your child may have Crohn’s disease, he or she should see a paediatric gastroenterologist for further workup.

How is Crohn’s disease in children treated?

In general, medications for treatment of Crohn’s Disease are divided into 2 categories. The first category is drugs used to control the disease. The second category of medications helps keep the symptoms from starting or coming back. Your child might have to take a combination of medication to control his condition.

Upon diagnosis of Crohn’s Disease, it is common for your paediatric gastroenterologist to start your child on a liquid diet for a while.  This can help the lining of the digestive tract to heal. Absorption of nutrients will improve which will help your child to grow. Your doctor will monitor your child’s weight and height closely during follow-up.

The inflammation of the digestive tract in Crohn’s disease can make it hard for a child to get sufficient nutrients from food. Your doctor might prescribe vitamins and other supplements together with the rest of the medications.

Will my child get better?

Crohn’s disease is a lifelong condition. There is currently no cure. However with treatment, we can aim for your child to lead as normal a life as possible: going to school, playing sports and going on family holidays.

It is also important to work closely with your doctor to get the disease under control early so that your child’s growth potential is not compromised. Unlike adults, children need to grow and there is a window period for growth to occur, usually towards the teenage years. If the Crohn’s disease is under control, there will be improvement to the damage of the digestive tract. Food nutrients can then be absorbed allowing optimal growth to occur.

What about the long term?

The goal in our treatment of Crohn’s disease is to enable the child to lead as normal a life as possible. It is likely that he or she will need to continue with long term medications with regular visits to the doctor. However, if the disease is well controlled, treatment can be maintained without further escalation.

Crohn’s disease can increase the risk of colon cancer especially in those with poorly controlled disease. It is recommended that patients with Crohn’s disease get screened early and often. The best modality for screening is a colonoscopy which might need to be performed every 1-2 years after a few years of Crohn’s diagnosis. 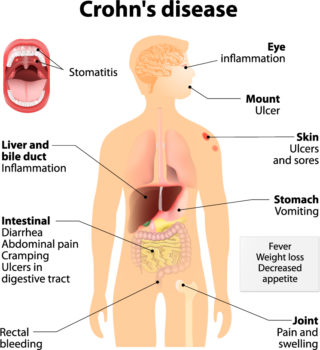